The flat-headed cat (Prionailurus planiceps) is a small wild cat patchily distributed in the Thai-Malay Peninsula, Borneo and Sumatra. Since 2008, it has been listed as Endangered on the IUCN Red List due to destruction of wetlands in its habitat. It is suspected that the effective population size could be fewer than 2,500 mature individuals, with no subpopulation having an effective population size larger than 250 adult individuals.

Flat-headed cats are presumably solitary, and probably maintain their home ranges by scent marking. In captivity, both females and males spray urine by walking forward in a crouching position, leaving a trail on the ground. Anecdotal historical accounts report that flat-headed cats are nocturnal, but an adult captive female was crepuscular and most active between 8:00 and 11:30 and between 18:00 and 22:00 hours.

The stomach contents of an adult shot on a Malaysian riverbank consisted only of fish. They have been observed to wash objects, raccoon-style. Live fish are readily taken, with full submergence of the head, and the fish were usually carried at least two meters away, suggesting a feeding strategy to avoid letting aquatic prey escape back into water. Captive specimens show much greater interest in potential prey in the water than on dry land, suggesting a strong preference for riverine hunting in their natural habitat. Their morphological specialization suggest that their diet is mostly composed of fish, but they are reported to hunt for frogs, and are thought to catch crustaceans. They also catch rats and chicken. 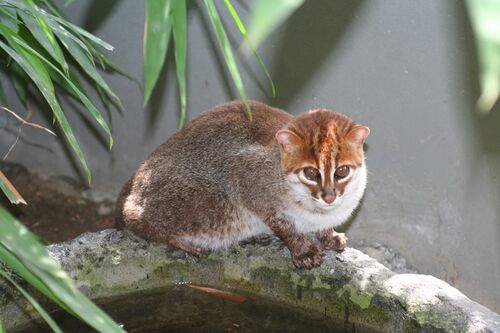